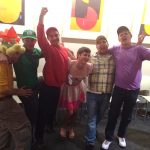 On Friday, July 21 at 7:30 pm, Grand Valley State University’s PSEUDO Improv Comedy Troupe returns to the Creative 360 stage. Laugh the night away as Ryan Farrell, Jacob Molli, Dominic Petriella, Tony Sanchez, and Eric Stine perform smart, funny, and sometimes racy scenes made up right on the spot! The Most Dangerous Improv Game is always a feature, and they will debut a brand new act during this performance.

PSEUDO Improv Comedy has been Grand Valley’s premier improv comedy group since 1999. The group has evolved as students graduate and move on, but has maintained its original mission to relieve the stress of college classes and bring laughter to the masses. This hilarious team of comedians has been a highlight of Creative 360’s summer programming since 2012 when Midlander Alex Kempsell first brought the comedy team to Creative 360 as a fundraiser. The group still donates every penny of the proceeds.

PSEUDO says they return to Creative 360 each year, because the nonprofit embodies everything they love about the arts. “We all fell in love with the theater, comedy, art, and everything that makes life grand at places like this,” explained group member Eric Stine. “We donate our proceeds as a way of giving back what little we can as an enormous thank you for allowing us to do what we love – make people laugh.”

Learn more about Pseudo Improv Comedy on their Facebook page