CREATIVE 360 RETELLS ‘THE WAR OF THE WORLDS’ 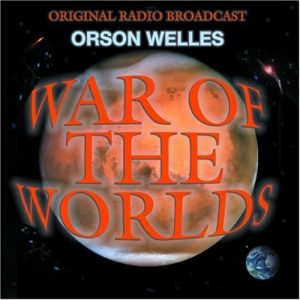 Creative 360 will reprise Orson Welles’ radio broadcast “The War of the Worlds,” in celebration of the 81st anniversary of the original that famously shook the country on Halloween night in 1938. This special Old Time Radio production, written by Howard E. Koch, features local actors Ron Kruman, Todd Little, John McPeak and David Ritter. JoAnn Pobocik, Carol Rumba and Terri Shroeder will perform old-time radio jingles and Cheryl Felch is the sound effects artist. There are two shows: Friday, October 25 and Saturday, October 26 both at 7:00 p.m. on the Gallery stage. Tickets are $10 pre-paid and $12 at the door. Call 989-837-1885 for tickets or register on Creative 360’s website at becreative360.org.

The original broadcast of “The War of the Worlds” was an episode of the American radio drama anthology series The Mercury Theatre on the Air directed and narrated by actor and future filmmaker Orson Welles. The radio play is based on the science fiction novel by English author H. G. Wells, written between 1895 and 1897. It is one of the earliest stories to detail a conflict between mankind and an extraterrestrial race. The memorable radio dramatization in 1938 allegedly caused public panic among listeners who did not know the Martian invasion was fictional.

“War of the Worlds” will be Creative 360’s ninth Old Time Radio production. Since March of 2017, more than 30 local actors have appeared live on stage performing a radio show just as they were done in years gone by complete with live sound effects. The popular programs have ranged from murder mysteries to Westerns. Creative 360 thanks Radio Wasteland Records in Midland for sponsoring this production.

About Creative 360
Creative 360 is a not-for-profit community arts and wellness organization founded in 1994. Its mission is to create environments that allow people of all ages and abilities to experience the creative process, and to enhance physical, mental and spiritual wellness through the arts and humanities. The organization’s core values of inclusiveness, creativity, respect and community drive the culture at Creative 360. Activities at Creative 360 are supported in part by the Michigan Council for Arts and Cultural Affairs, a partner agency of the National Endowment for the Arts, Midland Area Community Foundation and the Herbert H. and Grace A. Dow Foundation.