‘THE EXONERATED’ COMES TO THE CREATIVE 360 STAGE 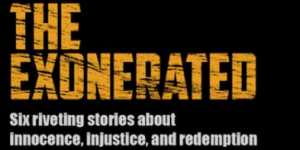 Creative 360 will host the play, “The Exonerated” on the gallery stage in two shows – Friday, February 7 and Saturday, February 8. Both shows begin at 7:00 p.m.

What would make a person who lives in North Carolina where spring is emerging return to the winter of Midland, MI? “This is a story that cries out to be heard and its voice drew me home,” explained Kendrick.

“As a practitioner of justice through law enforcement on the local and Federal level, I learned that the administration of our laws is not always equally applied. This powerful story speaks to these inequities in real and personal stories where the lives of people are literally at stake. That’s what drew me to it and the opportunity to be in Midland again.”

“The Exonerated” is not light-hearted fare. Each intense and deeply affecting story is a true accounting of the real-life experiences of six human beings – Sunny Jacobs, Robert Earl Hayes, Gary Gauger, David Keaton, Kerry Max Cook and Delbert Tibbs – who sat on death row for crimes they did not commit. All were later proven to be innocent.

About Creative 360
Creative 360 is celebrating 25 years as a not-for-profit community arts and wellness organization. 25 years ago, Cynthia Keefe and Linda Z. Smith founded “The Creative Spirit Center” with a vision to make creativity accessible to all. Since then, the nonprofit has become Creative 360 and welcomed countless people through its doors to express, expand and experience the creative process in all its forms. Creative 360’s mission is to create environments that allow people of all ages and abilities to experience the creative process, and to enhance physical, mental and spiritual wellness through the arts and humanities. The organization’s core values of inclusiveness, creativity, respect and community drive the culture at Creative 360. Activities at Creative 360 are supported in part by the Michigan Council for Arts and Cultural Affairs, a partner agency of the National Endowment for the Arts, Midland Area Community Foundation and the Herbert H. and Grace A. Dow Foundation.